The eye the mouth and the rest

Exploring the concept of the eye leads directly to the idea of vision as an act, a way of “seeing” that is first and foremost expressed in movement. For this work, the eye is understood as a tangible source of sensations, not only recording, but more accurately, producing what it sees.

The eye is a means to capture and understand the world. The eye is movement, projecting the fundamental vibrations of our existence and their startling fluctuations onto the flesh.

Here, the eye is an-eye-that-seeks-out all that that goes into my words and actions, all that currently haunts my being. Through the eye we contemplate life: our inner-selves, the pre-human, tactile and animal, the agitation of thought, the darkness, absence, possession, metamorphosis, exorcism, artifice and desire. The eye, prisoner of the body, tries to venture beyond it and embody the out-of-body and the surrounding landscapes.

In this piece, vision has a kind of magic that allows the eye to adjust to the light of inner spaces. From the eyes to the hand, from the hand to thought; the eye opens up the entire body to the world. This work begins with the opening of the eye, which then closes of its own volition. At the risk of losing our minds, we plunge, eyes squeezed shut, into our inner world, ransacking it as though it was made to be devoured.

Devour in the act of devouring.

Since 2012, I have choreographed several solos touching on certain aspects of the through an exploration of how being is constructed through the eyes of the other. My new work is a visual thought experiment, in which the eye actively captures the world in movement. The world is captured through the act of looking, which is manifested in the body of the dancer as creator. The dancer is a conduit allowing the internal image to venture out into the exterior world, by transforming a vision of reality into reality itself, a profound investigation of the inner-self into one of the space around the self and a hidden form of « seeing » into the incarnation of sight.

The piece was created in Brest, in dialogue with an exhibition of the same name at the Passerelle Contemporary Art Center (Brest), from February 4 to April 29 2017.
Curators: Etienne Bernard, Volmir Cordeiro, Marcela Santander Corvalan, Margot Videcoq.
Designed as a space in which to dissect body and language, the exhibition brings to- gether around 40 videos from different fields, such as choreography, the visual arts, cinema and popular music. It is a complex, incomplete attempt to establish a kind of taxonomy of the face in choreography. From De Valeska Gert to Luiz de Abreu, from Steven Cohen to Maguy Marin, the focus is on the expression and the expressiveness of the body as well as the way in which the face can be considered a focal point for receiving the outside world a way to transmit it to the rest of the body.
http://www.cac-passerelle.com/exposition/loeil-la-bouche-et-le-reste 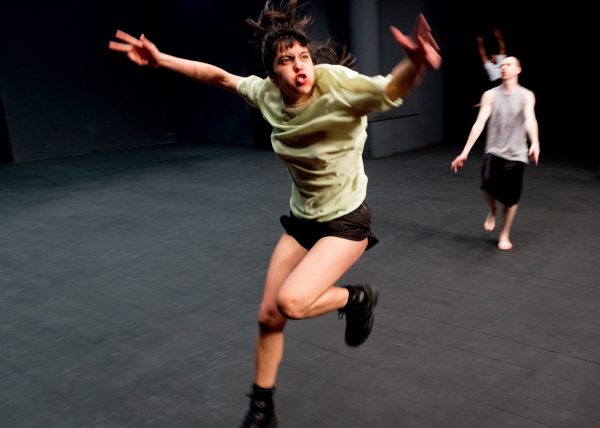